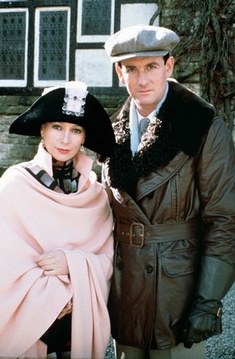 Tommy and Tuppence are a married couple although their first adventure together was prior to their marriage when they were rather down at heel "Bright Young People" firmly committed to getting ahead in life and making some money, a concern that Tuppence, a practical, pragmatic and highly intelligent girl, was rightly focused on. Tommy was a veteran of World War I and the experience seems to have left him with his original romantic experience intact, but with an urge to continue to be of faithful service to his country- an attitude that leads him into a career in the intelligence services.

‘Young Adventurers Ltd’ was Tuppence’s inspiration. The young twenty something, hopelessly broke after the war, meets her old friend Tommy at Dover Street tube; together they devise a new strategy to make money. Willing to hire themselves out, with the caveat that no offer be ‘unreasonable’, they quickly find themselves embroiled in a sinister political conspiracy. Even Tommy and Tuppence could never have imagined the adventures they would embark on.

Tuppence marries Tommy at the end of The Secret Adversary, their first book together. They go on to have three children, twins, Derek and Deborah, and an adopted daughter called Betty. Tommy and Tuppence appear in five novels, The Secret Adversary, N or M? By the Pricking of my Thumbs and Postern of Fate. Partners in Crime is a short story collection; in each story Tommy and Tuppence solve cases in the manner of a famous fictional detective – including Hercule Poirot!

On screen Tuppence has been portrayed most famously by Francesca Annis in the television series Partners in Crime. She was also the first of Christie’s heroines to be portrayed on screen in Die Abenteurer – the first film adaptation of Christie’s work.

James Warwick and Francesca Annis Tommy Beresford, an unimaginative but charming young man, encounters a childhood friend, Tuppence Cowley, after he is released from service in World War One. Jobless, they decide to start 'Young Adventurers Ltd' - "Willing to do anything. Go anywhere...No unreasonable offer refused." Christie describes Tommy’s face as “pleasantly ugly – nondescript, yet unmistakably the face of a gentleman”. He is in his early twenties at the beginning of The Secret Adversary, where his partnership with Tuppence begins. They later marry and appear together in five books, one of which is the short story collection Partners in Crime. The Beresfords age gracefully in the course of their last three books: N or M?, By the Pricking of My Thumbs] and Postern of Fate. In the final novel they are seen as retired grandparents who still love a good mystery. To the end, Tommy remains the slower thinker whose natural caution serves as the perfect foil to Tuppence's impetuous nature.

The Secret Adversary was the first Christie feature film ever made; adapted by the Fox Film Corporation in 1928 as a silent movie for Germany titled 'Die Abenteuer G.m.b.H', which translates as ‘Adventure inc’.

In 1984, The Partners in Crime television series aired on LWT starring James Warwick and Francesca Annis as Tommy and Tuppence. It featured ten of the fifteen short stories from the book of the same name. The two actors made a convincing couple and the lavish sets and costumes from the 1920s made this a popular series. They appeared again in 1985 with the LWT full length television film of The Secret Adversary.