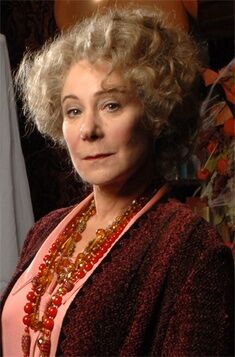 Ariadne Oliver is a successful detective novelist that appears in two short stories (with Parker Pyne in Parker Pyne Investigates) and seven novels (six of them with Hercule Poirot). The middle-aged writer of detective stories is broad-shouldered and has "rebellious" gray hair, sometimes accentuated with hair extensions. Ariadne Oliver is known for her love for apples and her strong belief in woman's intuition. She is also the creator of the Finnish detective Sven Hjerson, of whom she has a great dislike. The character of Mrs. Oliver is an exaggerated version of Agatha Christie herself (Agatha has shown dislike towards Poirot, her creation, and Agatha was known for eating apples, too). Some of the novels Oliver had written included The Dying Goldfish, The Affair of the Second Goldfish, Death of a Debutante, The Cat it Was Who Died, The Death in the Drain Pipe, The Woman in the Wood (based on her experiences from the Poirot novel Dead Man's Folly), and even her own penned story The Body In The Library. Some of her published articles were The Tendency of the Criminal, Famous Crimes Passionnels, and Murder for Love vs. Murder for Gain.

The first novel in which she appears is the Poirot story ''Cards on the Table, with Poirot. It is learned in the novel, however, that Poirot and Oliver had already met previously. She assists Poirot and the other detectives in the novel with the investigations necessary to determine the identity of Mr. Shaitana's murderer.

In Mrs. McGinty's Dead, she meets Poirot again in a village where a murder of an elderly lady had taken place. Mrs. Oliver invites Poirot to a party to give out prizes for a murder hunt game in Dead Man's Folly, only to find a real dead body. She pairs up with Poirot again in Third Girl to search for a missing girl who might have committed a murder. (Oliver is great fun in this one.)

Ariadne has been invited to a Hallowe'en Party for young people going to school, to then find a girl murdered there; she ends up enlisting Poirot to help her discover the murderer's identity. In her final recorded case with the Belgian sleuth (Elephants Can Remember), she aids Poirot in uncovering a mysterious murder-suicide of the parents of her goddaughter.

The Pale Horse is the only novel in which Poirot doesn't appear with Ariadne. The story begins with the murder of a priest caused by a vital secret he held. The story centers on a young man's attempt to solve the murder; Mrs. Oliver helps him, whose cousin was known to Oliver in the novel Cards On The Table. Together the young man and the police uncover a plot connected with the secretive Pale Horse Inn.

Was Ariadne Oliver Based on Agatha Christie Herself?

It is interesting to speculate how much of Agatha Christie is in Ariadne Oliver, specifically Agatha Christie the authoress that is – their personal lives have little in common. But when, in ‘Mrs McGinty’s Dead’ Ariadne says, ‘Authors are shy, unsociable people, atoning for their lack of social aptitude by inventing their own companions and conversations,’ she is also speaking for Agatha.

Because in her autobiography, Agatha Christie admits, ‘I am not and never shall be a good conversationalist…I can’t say what I mean easily – I can write it better.’ And elsewhere in the same book, Mrs Oliver complains bitterly,’…you’ve no idea of the agony of having your characters taken and made to say things that they never would have said, and do things that they never would have done. And if you protest, all they say is that it’s ‘good theatre’.’ That is surely a cry from Agatha’s heart as well (and is echoed by her legions of fans to this very day!)

On one occasion, Ariadne Oliver tells how someone wrote to tell her that a blowpipe is actually six feet long, not one foot long, as she had made it in one of her stories. And of course, in ‘Death in the Clouds,’ Agatha Christie features a one-foot long blowpipe.

Both Agatha and Ariadne have a non-British detective with very distinct idiosyncrasies (Sven Hjerson, Mrs Oliver’s Finnish detective, breaks the ice on his bath each morning!).

Ariadne frequently bemoans the fact that she has given her hero quite so many foibles because she is stuck with them. As she says, ‘The people who read my books know what he (Sven) is like.’ Doubtless, there would be times when Agatha felt just the same.

On screen, two actresses have portrayed Mrs. Oliver. The American actress Jean Stapleton starred as Ariadne Oliver in a television adaptation of Dead Man's Folly in 1986, with Peter Ustinov as Poirot. More recently, in 2005's Cards on the Table with David Suchet as Poirot, Zoe Wanamaker appeared as Mrs. Oliver.